The history of Forte Belvedere

Sperrwerk Gschwent in Lafraun, today better known as Forte Belvedere in Lavarone, was designed by the Lieutenant of the Army Corps of Engineers Eng. Rudolf Schneider and built between 1908 and 1912 not far from the Óseli village, on a limestone headland (1177m above sea level) overhanging the Astico valley. This valley marked at that time the frontier between the Italian Kingdom and the Austro-Hungarian Empire. 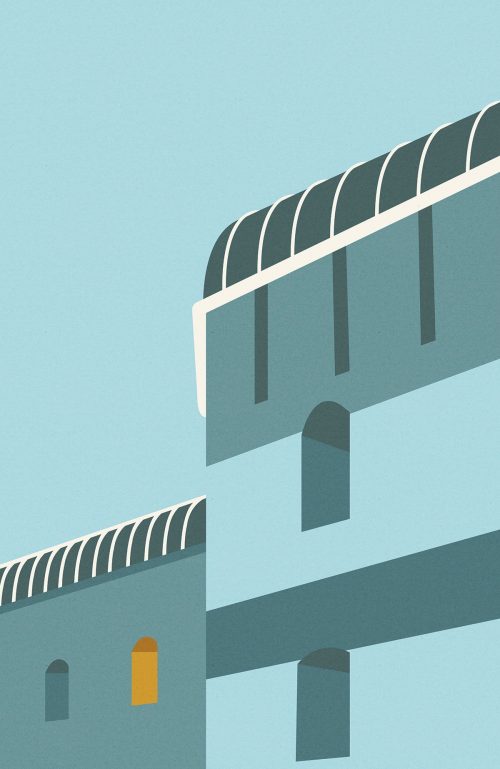 The fortress consists of several blocks carved into the mountain: the main blockhouse – which housed quarterings, warehouses, supply and transport – the battery block in a forward-facing position, the counterscarpe in the moat and three armored outposts. In order to withstand the heaviest bombing the stronghold was build with more than 2,50m thick coverage of concrete in which was a triple layer of 400 mm-thick steel beams incorporated. Conceived, like the other strongholds on the highlands, to withstand in complete autonomy the bombings that could last for days, it was provided with a large warehouse, an aqueduct with a water purifier, an internal power station, an emergency room for the injured, a telephone exchange and a room for the optical telegraph to communicate with the outside.

Under the command of Captain Anton Perschitz, the garrison consisted of one hundred and sixty Landesschützen (1st Regiment) supported by sixty territorials. The armament was composed of three howitzer caliber 10cm in armed cupola, manufactured by Skoda Werke, Pilsen in Bohemia, and of twenty-two machine guns. Although during the first year of war it underwent heavy bombings and losses it was not hit as heavily as the area of Passo Vezzena and Luserna, where the attacks put to a severe trial the strongholds of Cima Vezzena, Busa Verle and Lusérn. Due to its location overlooking the Astico valley it never suffered a direct assault by the Italian infantry. During the Post-war period the fort became State property and it was lent for a long period to the Municipality of Lavarone. Unlike the other strongholds of the highlands, Fort Belvedere escaped the demolition ordered by the Fascist government in times of self sufficiency by royal decree of King Vittorio Emanuele III.

Nevertheless, in November 1940 a partial dismantlement of the fortress began. In particular, the armed domes were removed, the first layer of beams was taken from the covering and the metal cladding of the roof was taken away. After the Second World War, the fort became property of the Region Trentino Alto Adige and from 1966 to a farsighted private person who partially restored it and transformed it into a museum. In 1996 it was purchased by the Municipality of Lavarone (with the deciding contribution of the Autonomous Province of Trento), which carried out a substantial conservation-restoration, restoring the original ceiling in zinc, rearranging the floors and completely reorganizing the site. A modern and updated historical museum was also set up (with texts in Italian, German, and English) with educational and informational purposes, not only devoted to Fort Belvedere and the strongholds of the highlands, but also presenting broader local and international issues about First World War. Moreover, thanks to the support of the Autonomous Province of Trento and the work of Studio Azzurro, Milan, Fort Belvedere recreates today the tragedy of the war through the creation of a series of interactive multimedia installations evoking scenes of daily life in the fortress during the conflict: an emotional experience reflecting the horror of one of the most devastating wars in the history of man and giving a message of peace to future generations.